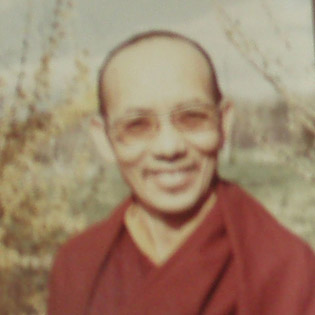 Born in the capital of Tibet, Lhasa, in 1924, Ge-dun-lo-drö entered Dre-pung Monastic University and within that, Ham-dong House in Go-mang College, on the outskirts of Lhasa at the age of nine as a novice monk. He took basic examinations in 1940, received full ordination in 1947, and gained the degree of Geshe in 1961 in exile in India as the first among three scholars who were awarded the number one ranking in the highest class. He was a scholar of prodigious learning, keeping in active memory 1,800 folios of basic texts, which in English would be at least 3,600 pages. He stated that he accomplished this by using all spare time (such as in walking from one place to another!) to recite texts to himself. Even more, he was famed for his ability in debate; by his own account he was the equal of others when taking the position of challenger but was at his best when answering others’ challenges. This undoubtedly was why he was chosen to become a faculty member at Go-mang College before graduation.

He once told the story that when the Chinese began shelling in Lhasa, he climbed the steep hill above Dre-pung and looked down on the unfolding scene, realizing that the type of life and opportunity for study he had had until 1959 would never occur again. He knew he was seeing the end of an era.

In exile in India, he took his Geshe degree with top honors and later when the Dalai Lama conducted interviews of all the geshes who had escaped, Ge-dun-lo-drö was declared to be the top scholar. The Dalai Lama sent him to teach at the University of Hamburg in 1967, where he learned German fluently and eventually became a tenured member of the faculty. His main teacher, Ngag-wang-leg-dan, abbot emeritus of Gyume Tantric College in Lhasa, spoke very highly of his student, and encouraged his own students to study with him in Hamburg. His fluid treatment of many philosophical issues led to an invitation to the University of Virginia in 1979, where he taught on many topics, including materials to be found in several UMA Institute publications and other published books. He returned to Hamburg at the beginning of August of 1982, and suddenly passed away that November.

In 1974, Ge-dun-lo-drö published a history of Drepung Monastery in Tibetan with a German introduction. An electronic copy of the book is freely available here.