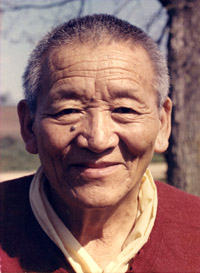 Ngag-wang-leg-dan (ngag dbang legs ldan) was born in 1900 in Yag-day on the border between the central and western provinces of Tibet. He was a singer and player of a guitar-type instrument before entering the Go-mang College of Dre-pung Monastic University. He trained for a while to develop the multi-tonal voice to become a chant-master but was encouraged to enter the scholarly path. He eventually earned the Ge-she degree as second in the annual competition at the annual Prayer Festival.

He entered the Tantric College of Lower Lhasa, and became abbot prior to the invasion of Tibet by the Chinese Communists. At the time of the invasion, he had already been elevated to the position of “abbot emeritus” and, after fleeing to India, helped to reestablish centers of Buddhist learning and meditation in India. Events brought him to France where he tutored several monks, and in 1969 he came to the Lamaist Buddhist Monastery of America in Freewood Acres, New Jersey (now the Tibetan Buddhist Learning Center in Washington, New Jersey), where Jeffrey Hopkins studied and practiced from 1963 to 1968. Hopkins says:

"On first meeting, we were sitting in what would have been the living room in an American ranch house but which was originally the temple in Geshe Wangyal’s monastery, adorned with multiple wall-hangings. He began speaking about the foundational topic of refuge in such a profound, eloquent, and moving way that tears came to my eyes. Soon I asked him for teaching on the view of emptiness in the highest philosophical school, the Middle Way Consequence School, and he started through testing me by teaching the introduction and non-Buddhist sections of Jam-yang-shay-pa’s huge Great Exposition of Tenets; I accepted the challenge, and in time he taught me the Consequence School section twice. The clarity and range of opinions that his expositions contained were exactly appropriate for me at a time when, after five years of motivational training by the charismatic and often chaotic Geshe Wangyal and after a fascinating introduction to the literature of tenets that study with Geshe Lhundup Sopa provided."

In January, 1970, Hopkins invited Ngag-wang-leg-dan to teach at Tibet House in Cambridge, Wisconsin, founded by the late Professor Richard Robinson and Hopkins a month earlier. Khan-zur Rin-po-che (Precious Former Abbot), an embodiment of the unified practice of sūtra and tantra and transmitter of ancient Tibetan knowledge of meditation, taught at Tibet House until August, 1971, at which point he returned to the Lamaist Buddhist Monastery of America. He passed away in the Fall of 1971 while Hopkins was studying with his student Ge-she Ge-dun-lo-drö (dge gshes dge ’dun blo gros) in Hamburg.